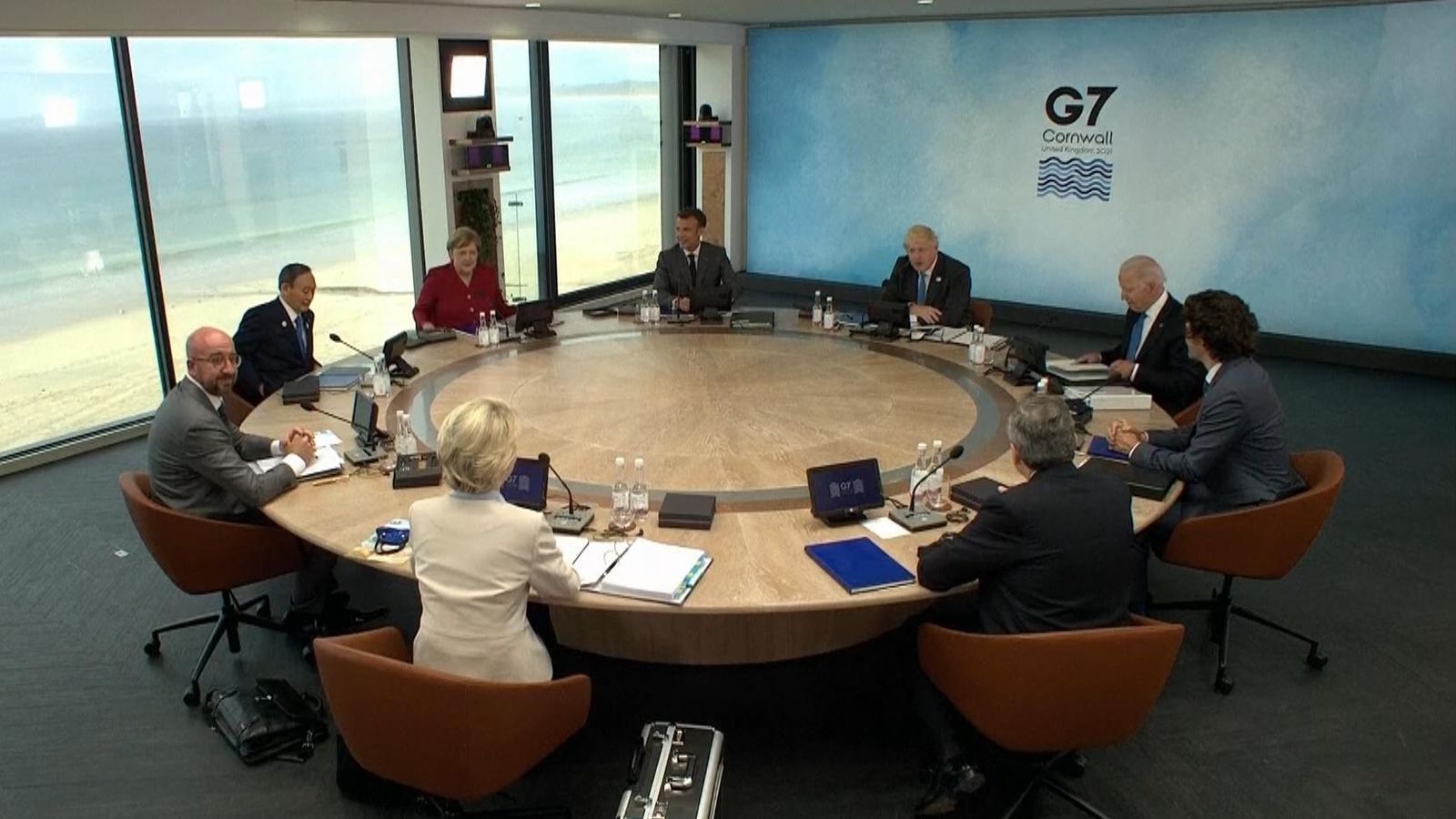 World leaders have arrived in Cornwall for this weekend’s G7 summit, as Boris Johnson looks to strike deals on COVID vaccines, girls’ education and the environment.

In one of the most high-profile moments of his premiership so far, the prime minister will chair meetings of the world’s leading democracies at Carbis Bay.

Follow live updates from the G7 summit in Cornwall

Although world leaders will enjoy some downtime during their stay – including a beach BBQ and toasted marshmallows over fire pits – their first in-person summit for almost two years will see them focus on the global recovery from the coronavirus pandemic.

As well as hoping to sidestep any fresh turmoil over lingering Brexit disputes, Mr Johnson wants this weekend to see G7 nations commit to providing one billion doses of COVID vaccines to developing countries as part of a bid to vaccinate the entire world by the end of next year.

The UK has committed to providing at least 100 million doses, while Mr Biden has said the US will purchase 500 million doses of the Pfizer jab to donate to poorer countries.

In an article setting out his agenda for the summit, the prime minister will also set out his ambition for a new global pandemic surveillance network, as well as an effort to accelerate the development of vaccines, treatments and tests for any new virus from 300 to 100 days.

Mr Johnson also wants the weekend to see G7 leaders commit to tackling the “moral outrage” of millions of girls around the world being denied an education.

“Our shared goal must be to get another 40 million girls into school by 2025,” he said.

“I will ask the G7 and our guests to contribute more towards the Global Partnership for Education’s target of raising $5bn (£3.5bn) for schools in the developing world.”

One subject on which Mr Johnson will be hoping to avoid headlines during the G7 summit is the continuing row over post-Brexit arrangements for Northern Ireland.

The prime minister is set to hold talks with the EU‘s Ms von der Leyen and Mr Michel on the sidelines of the summit, with the UK and the bloc remaining at a stand-off over the implementation of the Northern Ireland Protocol.

Ahead of the official start of the G7 summit, French President Emmanuel Macron pointedly shared an image of himself, Mrs Merkel, Mr Draghi and the two EU presidents sat at a table together.

“As always, the same union, the same determination to act, the same enthusiasm! The G7 can begin,” Mr Macron posted on Twitter.

On Thursday, Mr Johnson said he and Mr Biden were in “complete harmony” over Northern Ireland, despite earlier reports the US had lodged a formal diplomatic protest with the UK over the dispute.

Ahead of the UK hosting the COP26 climate change summit later this year, environmental issues will also be a large part of discussions over the weekend.

Prince Charles is hosting a reception on Friday for the G7 leaders and CEOs of some of the world’s largest companies to discuss how the private sector can work with governments to tackle the climate emergency.

And Sunday’s final talks will see leaders addressed via a pre-recorded video from Sir David Attenborough.

The prime minister wants G7 nations to promise to halve their carbon emissions by 2030, in order to limit the rise in global temperatures to 1.5 degrees.