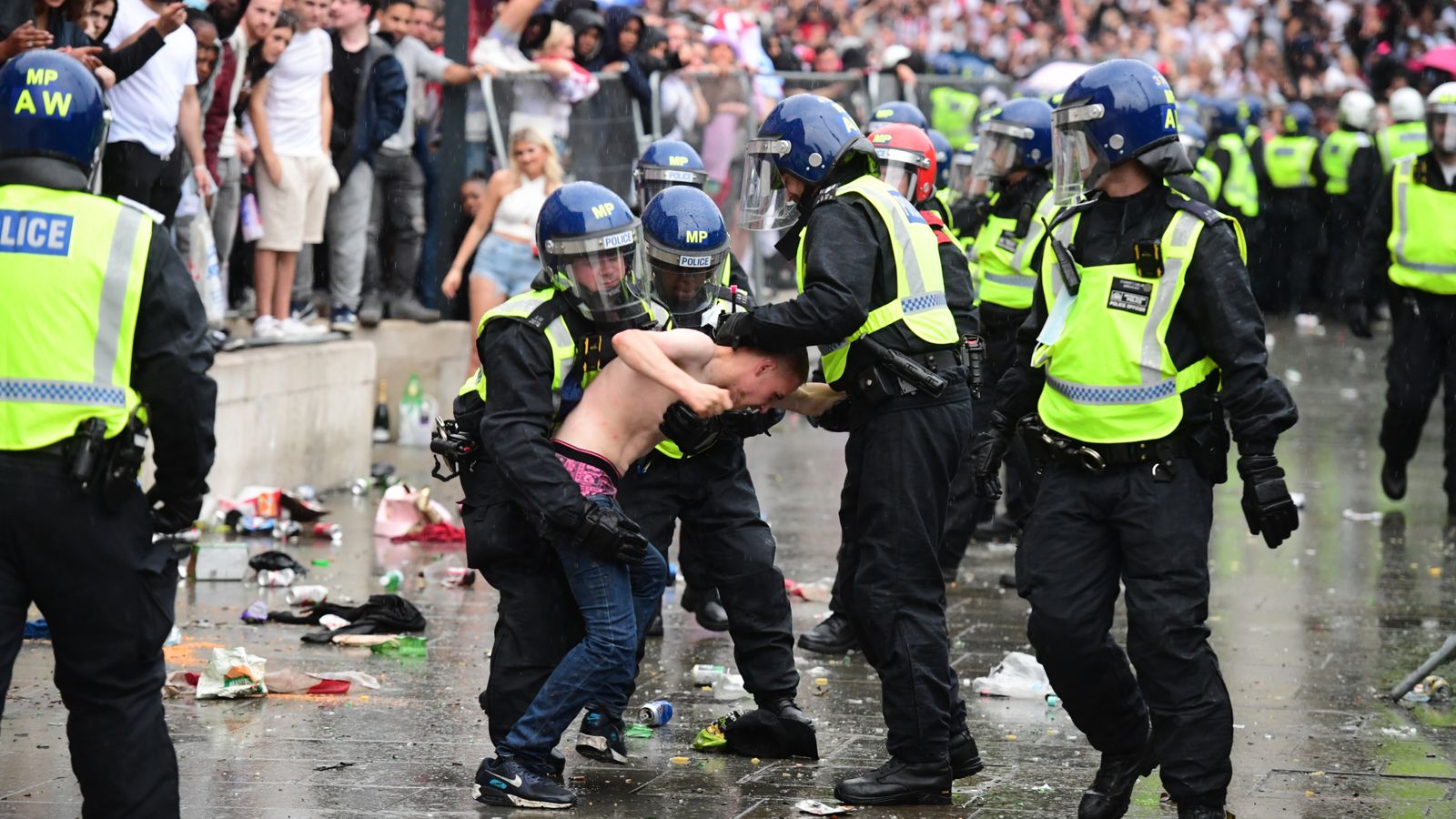 There was widespread praise for the performance of the young England team on the pitch at Wembley on Sunday evening.

They had come within reach of winning the European Championship, only losing 3-2 to Italy in a penalty shoot-out.

But their performance was marred by the behaviour of a minority of fans, with dozens arrested and a stream of abuse directed at players on social media after the game was over.

The Metropolitan Police said 49 people had been arrested for a “variety of offences” and that officers would be on hand throughout the night.

They also said that 19 officers were injured as they “confronted volatile crowds”. It gave no detail of the extent of the injuries but said the fans’ behaviour had been “wholly unacceptable”.

Earlier in the day, fans were pictured in London’s Leicester Square throwing bottles and road cones, leaving the area littered with rubbish.

Police said some people in the capital had been “jumping off street lamps or hoardings”, something officers warned “could easily end in injury”.

And before the game started, around 100 fans were pictured breaking through security barriers at Wembley, running into the ground as staff tried to stop them but were overwhelmed.

After the game, most fans directed messages of praise and encouragement for the players.

Police said they were investigating “racist and offensive” messages on social media and the Football Association added that it “strongly condemns” the abuse.

The FA added: “We could not be clearer that anyone behind such disgusting behaviour is not welcome in following the team.

“We will do all we can to support the players affected while urging the toughest punishments possible for anyone responsible.”

The England team said from their Twitter account they were “disgusted” at discriminatory abuse of their players following the Euros final.

“We’re disgusted that some of our squad – who have given everything for the shirt this summer – have been subjected to discriminatory abuse online after tonight’s game,” the team said.

“We stand with our players,” they added, alongside a heart emoji.

Russian teen faces years in jail over social media post
Ukraine War: ‘This is such a stupid tank’: Commander’s plea for modern tanks on Bakhmut frontline
Records show Santos’ mom was not in US on 9/11 despite his claims
Boris Johnson confronted over ‘sleaze’ allegations
Ukraine War: Will Germany send tanks to Ukraine?