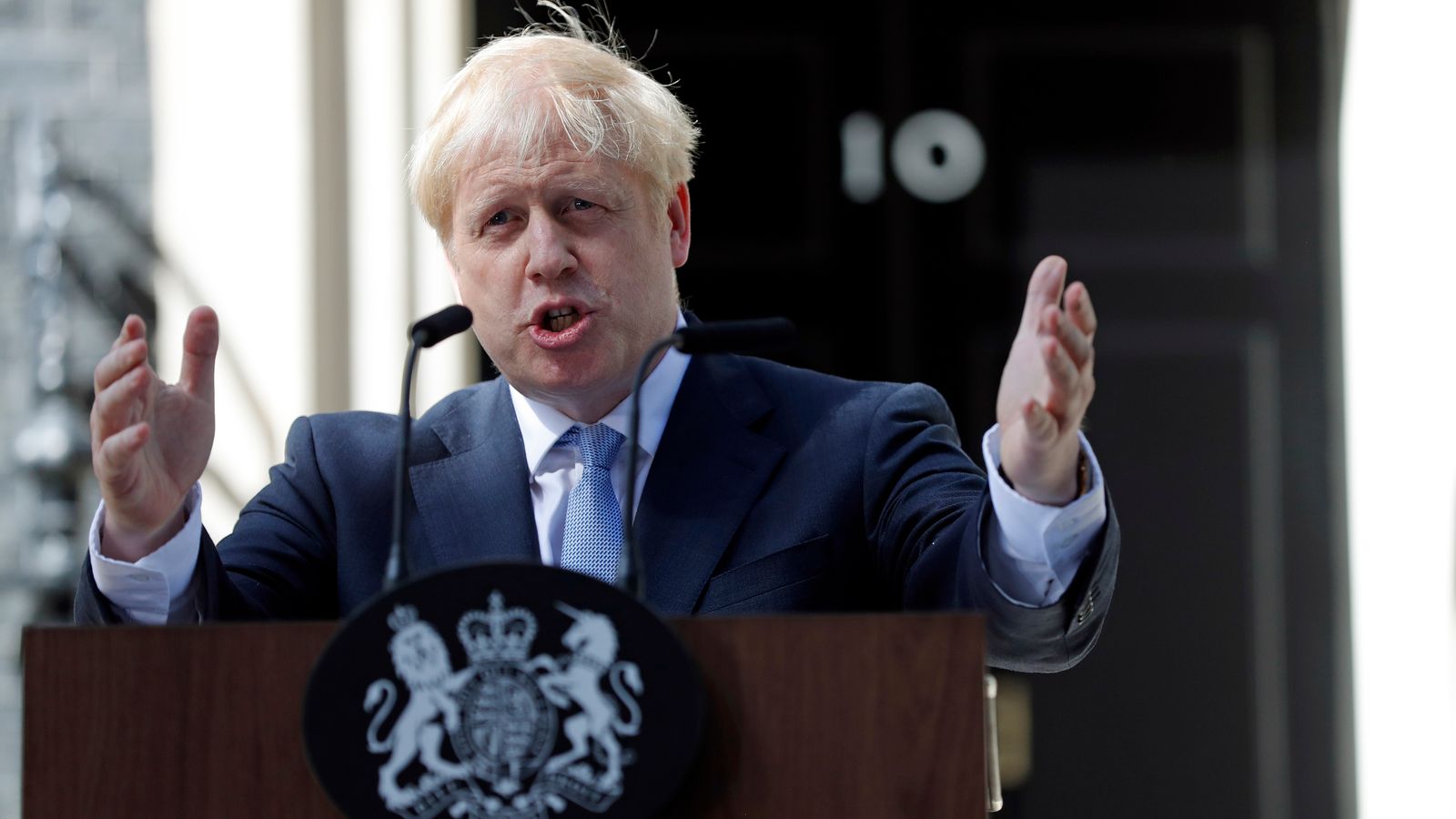 Throughout his life and political career, Boris Johnson has believed the rules don’t apply to him. And as he marks his second anniversary as prime minister this weekend, it seems nothing’s changed.

It was a claim first made by one of his masters at Eton. And the view was reinforced as recently as last Sunday when he tried to dodge self-isolating after coming into contact with COVID-positive Sajid Javid.

Forced into a humiliating U-turn, Mr Johnson is spending his second anniversary as PM isolating at Chequers. So no chums, political cronies or family members to celebrate with him. Or so we’re told.

But, hey, there are worse places to self-isolate than the PM’s 16th century grace and favour mansion house in the Chilterns, a 1,500-acre hideaway with a tennis court and swimming pool.

Plenty of time for the PM to reflect on a tumultuous two years even by the standards of his rollercoaster life: a second divorce, a third marriage, another child and – of course – narrowly escaping death from COVID.

As well as all that, he’s imposed three national lockdowns – so far – in England, held 57 coronavirus news conferences in Downing Street and introduced countless draconian rules and restrictions that have put him on collision course with Tory MPs and triggered several big backbench rebellions.

That’s after a Brexit war of attrition in his first year in which he shut down parliament illegally, kicked out 21 rebel Conservative MPs, won the Tories’ biggest election victory since Margaret Thatcher in 1987 and fulfilled his pledge to “get Brexit done”.

It’s been two years in which he has hired – and fired – Dominic Cummings, broken a Tory manifesto pledge on overseas aid and been accused of breaking an international treaty on trade and ripping up his own Brexit deal on the Northern Ireland protocol.

After his brush with death, he’s become a fitness obsessive, declaring in a speech last year “My friends, I was too fat” and embarking on a punishing exercise regime involving early morning runs through London parks with his Jack Russell cross Dilyn.

He even – temporarily, perhaps – became a football fan during the Euros, wearing his England jersey over his shirt and tie at Wembley in a display that was denounced as a crime against fashion.

Is it really only two years ago that Mr Johnson entered 10 Downing Street on 24 July 2019 and vowed to prove the “doubters, doomsters and gloomsters” wrong over Brexit? Oh, and he also promised to “fix the crisis in social care once and for all”.

Two years on, we’re still waiting on social care, with the PM squabbling with his chancellor, Rishi Sunak, about how it should be paid for and a blueprint promised earlier this week now postponed until the autumn.

With no Commons majority to speak of in the summer of 2019, Mr Johnson dragged the Queen into the Brexit row by proroguing parliament, a move later ruled unlawful by the Supreme Court.

But after Labour dropped its opposition to a general election, he called a poll for 12 December. And after a typically flamboyant Johnson campaign involving a bulldozer and a pledge of an “oven-ready” deal on Brexit, he won an 80-seat majority.

Jeremy Corbyn’s Labour Party was crushed as the Conservatives won seats in a so-called “Red Wall” in the north of England and the midlands that had been held by Labour for generations. British politics had been turned upside down.

On 31 January 2020, the UK finally left the European Union. But even now the battles between London and Brussels over the small print of the deal are still raging, with the Northern Ireland protocol disagreement no closer to being resolved.

In February last year it was all change for the PM: Sajid Javid quit as chancellor after Mr Cummings told him to sack his advisers, Mr Johnson was divorced from his long-suffering wife Marina Wheeler and 11 days later he announced that he and his girlfriend Carrie Symonds were engaged and expecting a baby.

What could possibly go wrong? Well, nearly everything, as it turned out.

In March COVID-19 was declared a pandemic by the World Health Organisation, Mr Johnson was forced to announce the first lockdown in England, in a grim TV address to the nation, and then he tested positive.

But the drama was only just beginning. The day after Sir Keir Starmer was elected Labour leader, the PM was admitted to hospital for a week, including three nights in intensive care. Two weeks after he left hospital, Carrie gave birth to a son, Wilfred.

Lockdown measures were eased in May, but the PM’s whole COVID strategy was undermined by Mr Cummings making a lockdown-busting trip to Durham, including a drive to nearby Barnard Castle, he claimed, to test his eyesight.

Although it was the beginning of the end for the maverick Mr Cummings, the PM should have fired him there and then. Instead, the soap opera reached a climax – or nadir – with an excruciating news conference by Mr Cummings in the Downing Street garden.

It was November, after a second lockdown in England, before Mr Cummings left Number 10, carrying a cardboard box containing his belongings. Also ousted was the PM’s spin doctor, Lee Cain, in what the pair claim to this day was a coup masterminded by the PM’s fiancée.

Meanwhile, the PM was earning a reputation for COVID U-turns by easing lockdown measures in England in December, only to cancel Christmas, bring in tough new rules and then a third national lockdown – including shutting schools – in early January as the UK death toll topped 100,000. There has been criticism, too, of COVID contracts being awarded to Tory cronies.

But then came the vaccine breakthrough: the best news for the PM throughout the whole coronavirus crisis. Even his harshest critics wouldn’t begrudge him the success of the government’s rolling out of the vaccination programme.

The Tories also enjoyed what looked like a vaccine bounce in the opinion polls, although a new poll on the day of the PM’s second anniversary, in the i newspaper, suggests his vaccine bounce may now be ending, with his approval rating slipping into negative territory after a jab high three months ago and a majority now believing he is “dishonest, inconsistent and disorganised”.

And he has used this success to his considerable political advantage. “We vaccinate, he vacillates,” Mr Johnson has taunted Sir Keir several times during Prime Minister’s Questions this year. And the Tories have enjoyed what looks like a vaccine bounce in the opinion polls.

But as well as criticism for coronavirus U-turns, the PM has also come under fire over his financial arrangements and who is paying for his luxury lifestyle: a holiday in the millionaires’ playground of Mustique at Christmas/New Year 2019-20 and a costly makeover for the Downing Street flat, above Number 11, where he, Carrie, Wilfred and the dog live.

On the Mustique holiday, he was criticised by the Standards Committee for failing to ascertain who paid for it. And on the flat, his own ethics adviser, Lord Geidt, found that he acted unwisely over its funding.

More criticism of the PM came last month when the Health Secretary Matt Hancock was exposed by a video of what the Sun called a “steamy clinch” with his close aide, Gina Colandangelo, in his Whitehall office.

The matter was closed, the prime minister declared. Oh no it wasn’t! Barely 24 hours later, Mr Hancock was out, replaced by Mr Javid. Bad judgement by Mr Johnson once again, his critics said.

And last Sunday’s abrupt U-turn on self-isolating? Everything we know about the PM and the chancellor suggests it was prompted by Mr Sunak insisting that dodging the rules was wrong and he wanted no part of it.

There’s a common theme here – a casual relationship with the truth and a disdain for the rules – throughout Boris Johnson’s two years as prime minister, although it began much earlier.

Remember, as well of the recollection by his old Eton schoolmaster, he was sacked from The Times for making up a quote and from the Tory front bench by Michael Howard for lying about an affair.

When it was revealed he had a late-night row with Carrie Symonds at her flat two years ago, photos of his battered old car revealed unpaid parking tickets piled up against the windscreen.

And there’s a story of him being chased off a tennis court in a London park by an attendant because he hadn’t paid his £10 fee.

So far, however, despite Sir Keir claiming this week the “road will run out” for the PM because the public believe in “integrity, honesty and accountability” and the left-wing Labour MP Dawn Butler being thrown out of the Commons for accusing him of lying, voters don’t seem to care.

To his supporters, he’s their hero who won the Brexit referendum, who won the Tories their biggest Commons majority since the glory days of Margaret Thatcher in the 1980s and who succeeded where Theresa May failed and got Brexit done, as he promised.

Two years from now, with the Fixed Term Parliaments Act repealed, Mr Johnson could be leading the Conservatives into another general election campaign. And if the voters are still forgiving or simply don’t care about all the criticisms about his dodgy boasts and ignoring the rules, he could prove his critics wrong once again.

‘I was sad for the institution’: Nancy Pelosi speaks out about McCarthy speaker vote
Anti-government protests grip Peru for a second day
Taiwan: Live radio chatter between fighter jets reveals tension
Indiana man arrested after toddler shown on live TV with handgun
Calls for energy firms not to force people on to prepayment meters