There are two remarkable things about the launch of Boris Johnson’s net zero strategy.

The first is that the UK can rightfully claim it has become a global front runner.

The EU’s equivalent is not so detailed. We now know 2035 is the year by when the UK hopes to have ended fossil fuel heating, which is also unique. Britain is an outlier.

Yet, politically, the plans have so far proven remarkably uncontroversial.

Judging by the House of Commons debate, it enjoys a broad political consensus behind it.

Yes there was some Conservative grumbling on the backbenches, but nothing on the scale of the fireworks the topic might have provoked.

If there was a vote on it tomorrow, the net zero plan would receive overwhelming endorsement from the Commons.

The second remarkable thing is that in supporting this package, MPs are signing a blank cheque.

They’ve agreed a destination – net zero by 2050 – but what is remarkable is how little is known about the path we will take to get there and so many things on it could disrupt the support it currently enjoys.

The Treasury is up front – that it has no idea how much it will cost.

“It is not possible to forecast how individual households will be affected over the course of an economic transition that is expected to take thirty years to complete,” says the Treasury’s net zero review. 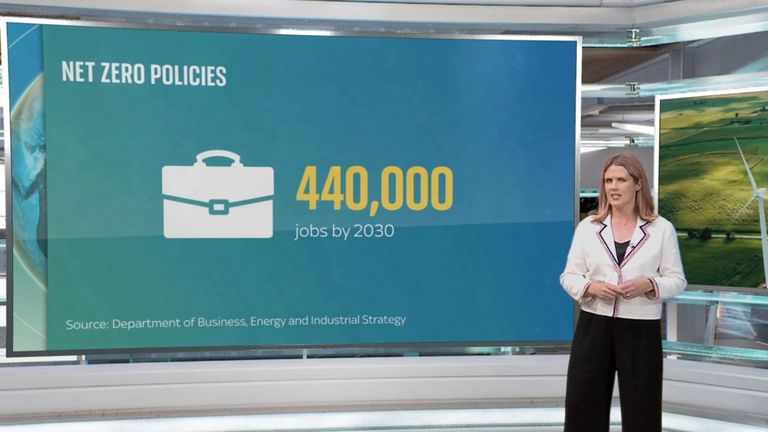 What is in the government’s net zero strategy?

The plan could mean higher taxes.

“If there is to be additional public spending, the government may need to consider changes to existing taxes and new sources of revenue throughout the transition,” the review adds.

Entire industries will be wiped out in the decarbonisation process, government says, with no certainty what that means for the jobs that will be lost, potentially hurting the poorest in society.

Meanwhile the Department for Business, Energy and Industrial Strategy admits it has no idea whether hydrogen will be part of the mix, or whether new technologies will overtake the plans for this decade and make some of the early spending decisions redundant.

One official told me that to ask for specific costs at this stage is to misunderstand the nature of the challenge.

“It’s like asking, 30 years ago, the cost of the world adopting new digital technologies,” they said.

However all of this uncertainty, which will entail three decades of difficult decisions, means that Mr Johnson and his successors will have to keep remaking the case every year to maintain the current coalition of support.