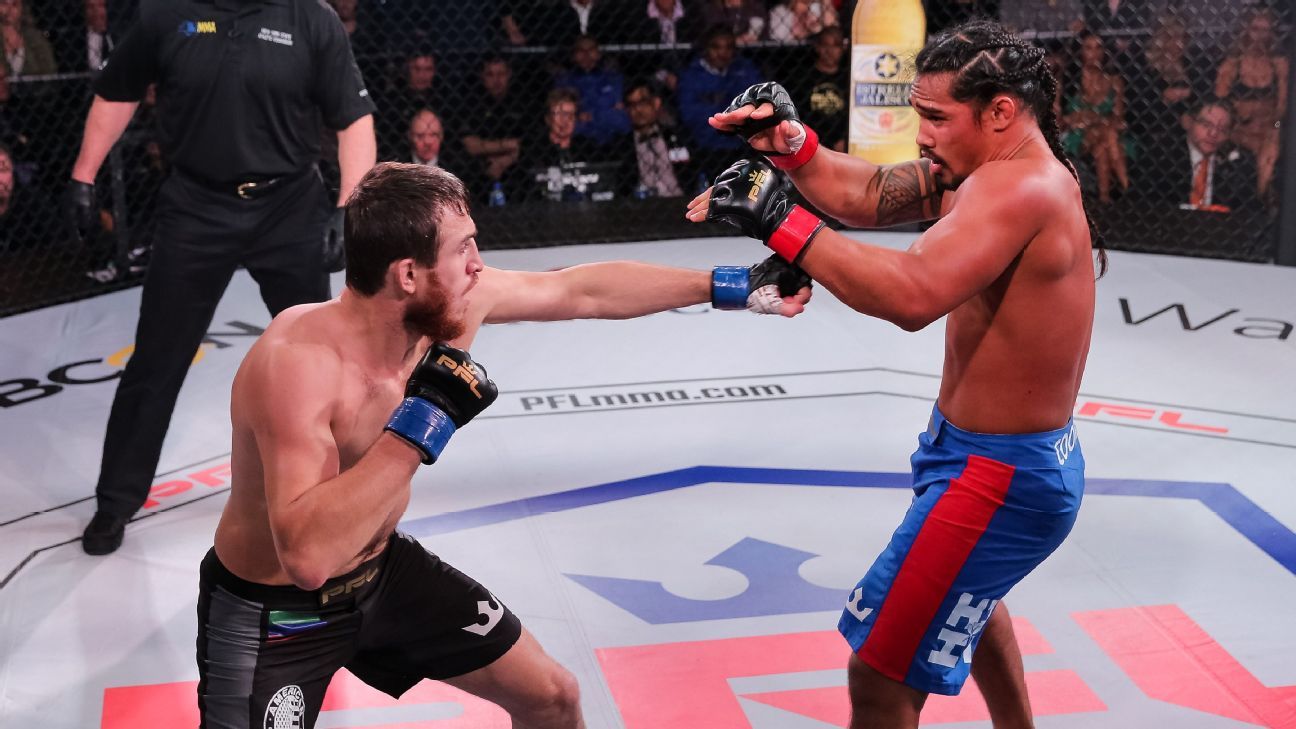 The 2021 PFL season will come to its conclusion on Oct. 27, with a full lineup of tournament championships in six different weight classes (4:30 p.m. ET, ESPN2/ESPN+).

Emerging women’s MMA superstar Kayla Harrison (11-0) will headline the event, in her lightweight final against Taylor Guardado (3-1). Arguably the most intriguing finals matchup, however, will be fought at welterweight, where Magomed Magomedkerimov (29-5) and Ray Cooper (23-7-1) will meet for the second time.

Magomedkerimov, of Russia, submitted Cooper via guillotine choke to win the 2018 Finals. Cooper, of Hawaii, rebounded from that defeat to win the 2019 Finals, although Magomedkerimov was unable to defend his throne that season due to an injury he sustained between his first and second fight in the playoffs.

Both welterweights have been outstanding in the 2021 season. Magomedkerimov is riding a 13-fight win streak and Cooper is coming off one of the biggest wins of his career, a unanimous decision over Rory MacDonald in the semifinals two months ago.

ESPN spoke to PFL commentator and retired lightweight Kenny Florian ahead of this anticipated rematch, and asked him to break it all down.

Editor’s note: Responses have been edited for clarity and brevity.

Okamoto: What was the biggest difference maker in the first meeting?

Florian: It seemed to me that Magomed had a little more variety to his game, a little more sophistication. Ray was extremely dangerous, but there was a little bit of — I don’t want to say recklessness, that might be too aggressive of a term — but he was still raw. He was leading with his aggression more than anything else.

How would you say each of them approached that first fight?

You saw a lot of forward pressure from Cooper. It seemed like he was just looking to knock Magomed’s head off. Magomed was using his footwork to diffuse that forward pressure. Each of their wrestling kind of nullified the other. Again, it seemed like Magomed was more seasoned and Ray was more raw. Cooper just wasn’t able to put it all together as much as he would have liked in the first round.

Ray started initializing the takedown and Magomed did a great job of utilizing an overhook to the control position and compromise Ray’s base a little, which caused Ray to let his head get away from his hips. His legs were no longer supporting his head, which made him susceptible to the guillotine.

You mentioned their wrestling nullified each other, but what more can you say about the grappling matchup here?

Magomed seemed more technical when it came to the wrestling. He had more counters, more defensive weapons. He was more fundamental. Ray was trying to get things done with his physical aspects and physical tools. Magomed was more refined.

What’s the biggest difference you see in Magomedkerimov since that first meeting in 2018?

Just a continuation of how comfortable he is. He’s more calculated. He’s shown a lot of experience this season, while reminding us how dangerous he is. He finds ways to get it done. He dealt with some adversity this year. He had a knee injury. He needed to get a first-found finish to ensure he would continue in the tournament and he did exactly what he needed to do. And that’s not an easy thing when you have that pressure.You saw that with a bunch of favorites this season, whether it was Anthony Pettis at lightweight or Lance Palmer at featherweight, sometimes when you’re the favorite it’s not easy. Magomed has always done what a favorite should do.

What is the biggest difference you see in Cooper since that first meeting?

I think Ray really knows how to put it all together now. He is a lot more patient. He is way more strategic than we’ve seen him. He’s able to control his emotions way more when he’s inside the cage. I think a lot of that has to do with the 2019 season and the fact he is a champion now. He has more fights under his belt. It feels like he learned from the mistakes of that Magomedkerimov fight.

Is there any psychological advantage on either side here, since it is a rematch?

Honestly, I don’t think so. Mainly because Cooper is a completely different fighter. He’s way better than the first time they fought. I also think Magomed has made improvements as well. With Ray, sometimes when you have vengeance on your mind, that chip on your shoulder can get the better of you, but I didn’t see any of that in his last fight against Rory MacDonald. And I know he was very motivated and wanted to prove himself in that fight against a true veteran. I thought there was a chance that would make him overly aggressive or overly emotional, and that was not the case. He was as cool and calm as I’ve ever seen him. So, I think we’re going to get the best versions of both guys.

What is the No. 1 question you have going into this fight, which will dictate the outcome?

A lot of it has to do with the range they fight at. Ray is most dangerous when he gets on the inside. I don’t want to compare him to a Mike Tyson, but think about that work on the inside, when he’s ripping to the body and throwing short hooks upstairs, uppercuts — those short range strikes are where he generates the most power. Him being a shorter and stockier guy, that is where he’s going to have to live against Magomed.

Magomed is that guy who obviously, with his reach, is going to try and keep Ray on the outside and at the end of his longer strikes. The first time I saw Magomed fight he reminded me a lot of Russian heavyweight Fedor Emelianenko. He’s Fedor, with even better submissions. The way he puts together his combinations right into takedowns is extremely impressive to watch. Positionally, he’s very good. He’s deceptive like Fedor. You look at his frame and say, ‘Who is this guy? He’s not gonna do anything.’ Then he goes out and just wipes the floor with you. He’s very physically gifted even if he doesn’t always look like it. He’s never rattled. He’s a very matter-of-fact finisher through and through.

The worst-performing tech stocks this week suggest the U.S. is done with Covid lockdowns
Met Police yet to receive complaint over claims Downing Street breached COVID rules with party last year
Three more Omicron cases identified in Scotland – taking UK total to 14
Entire Yorkshire CCC coaching team to leave in wake of Azeem Rafiq racism scandal
‘Someone is responsible… I know it’s not me’: Alec Baldwin says he does not feel guilt over film-set shooting