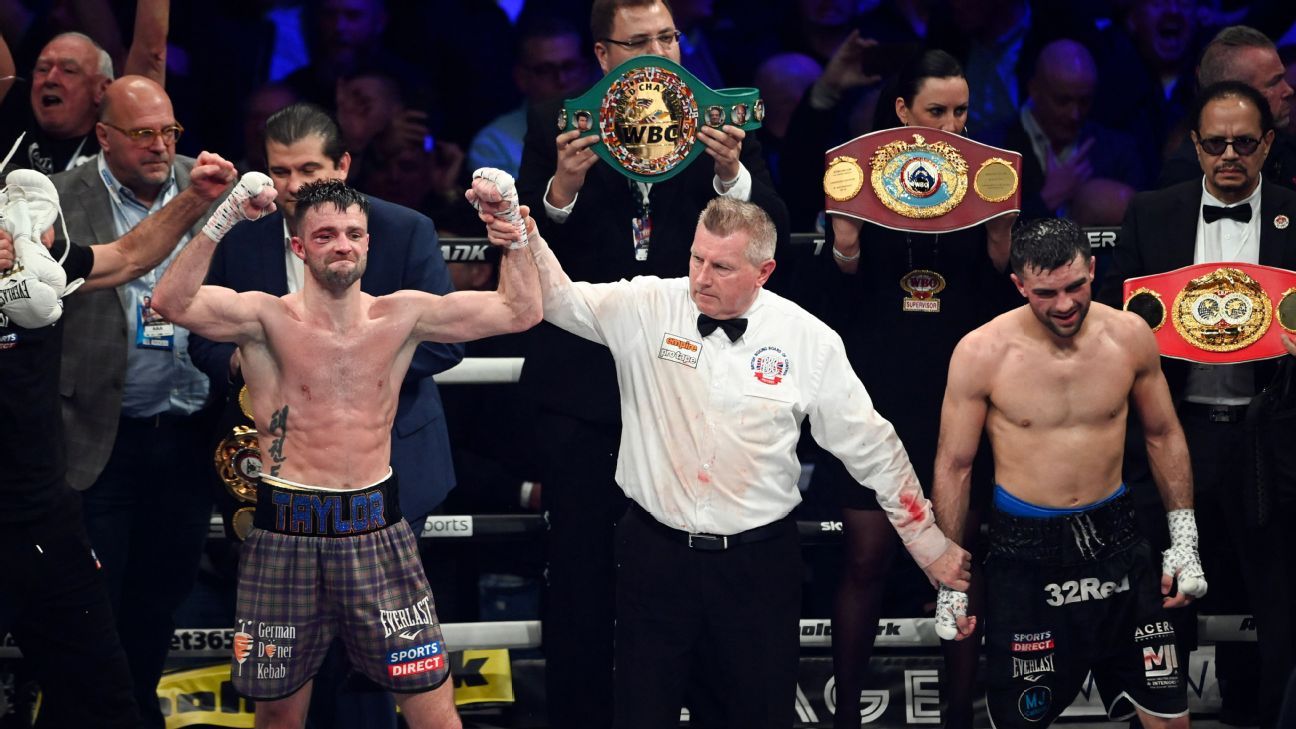 The result of Saturday’s undisputed junior welterweight championship fight between champion Josh Taylor and challenger Jack Catterall hasn’t sat well with me. The challenger did everything he was supposed to do to win, but the judges handed Taylor a split-decision victory.

I watched the fight a second time on Sunday morning (Watch replay on ESPN+), and then a third time after that just to make sure I wasn’t missing something. Minute after minute the trend was clear — this was Catterall’s fight. He had a plan and executed it brilliantly.

There were some close rounds early. I thought Catterall won the first round clearly and all three of the judges were on the same page. But all three judges gave the next two rounds to Taylor, while Catterall was controlling the distance, landing the cleaner, more effective punches and using his jab. The trend continued: Catterall outboxed Taylor, but Taylor picked up the rounds on the scorecards.

The judges didn’t answer the simplest question, and really the only question that they must answer after every round: Who won the round? Who landed the more effective punches? That’s how we need to judge a fight. A lot of times fighters get too much credit for moving forward regardless of what they’re doing, while fighters who fight off their back foot and actually box don’t get credit for that. That was clearly the case in this fight.

Aggression without effectiveness doesn’t mean much. Effective aggression is when you’re moving forward and actually impact the other fighter to the extent that you’re able to dominate. At no point in this fight was Taylor able to dominate or control the action. Every time Taylor would get Catterall to the ropes, he’d maybe land one shot and then Catterall would tie up and not allow the work — which was a great game plan.

It’s a common assumption in the sport that when it’s a close round, judges just default and give it to the champion. This can’t be the case. There was not one moment during the fight where Taylor actually hurt Catterall. Not only did Catterall outbox Taylor in his hometown, but Catterall hurt Taylor several times during the course of the fight, and he dropped him in Round 8. Even on the back end of the fight, when Catterall was backing up, Taylor wasn’t doing much work, and Catterall was still landing effective, clean punches when Taylor was moving forward.

Catterall won this fight by the eye test and by the numbers. Looking at the fight as a whole, minute by minute in each round, you will see who lands the cleaner, more effective punches. The CompuBox stats tell the same story: Catterall landed the most punches, the most jabs and the most power punches. The only category Catterall didn’t have the edge in was body shots, because Taylor was digging into the body — and he did have some success in doing so, but it simply wasn’t enough.

There was only one left hand that Taylor landed that was flush, and that happened in the last round. Taylor finally moved his head off to the side, tried his pull counter and he landed. It was effective. It was great, but it happened only once. The rest of the shots were down to the body, and then an occasional right hook.

Taylor’s a great inside fighter, but Catterall solved him and just laid out the blueprint on how to neutralize him for all his future opponents. Taylor couldn’t fight inside because Catterall took away his strength. That’s what it’s all about in boxing — beyond your own skills and abilities — taking away the other fighter’s strength. If a boxer is able to do that, and capitalize on his opponent’s mistakes, he is going to win a lot of rounds.

Taylor didn’t jab enough. He didn’t set up his attack enough, and he walked in with one idea on his mind — he thought he was going to come in and knock out Catterall. He had a rude awakening because Catterall had a plan of his own. And it was a better one.

The third man in the ring also made an impact on Saturday. Referee Marcus McDonnell became an active participant in this fight, in all the wrong ways. Sometimes in non-championship fights in England, with Queensbury rules, the referee is allowed to judge a fight. That wasn’t the case for this championship bout, but I felt something of that mentality on Saturday.

There’s a thin line with a referee being active and keeping a fight out of hand, and then overstepping his role. When two guys are fighting for their livelihoods, and the stakes are as high as they are in a championship fight, nobody wants a referee taking points unless he has no choice. If something’s completely deliberate, completely dirty, sometimes you don’t have a choice.

But both fighters were roughhousing one another, taking it up to that line while fighting for the undisputed championship of the world. And in both instances where McDonnell took a point — one for each fighter — nothing was even close to going over that line.

In fights like these there’s going to be some wrestling, some holding. There’s going to be some roughhouse tactics — that’s part of a fight. But instead of the referee getting involved by taking points, he needed to get control of the ring. Be in the fighters’ ears vocally. Be forceful, but reasonable. Referees who are too hands on and involved in a fight have to understand that it’s not about them. It’s about the two fighters. Why jeopardize a great fight to shine the spotlight on yourself — and in a negative way, too?

Before every fight, analysts, judges, referees and fans all have preconceived notions of how we think a fight is going to play out. We debate who is going to win, how they will do it and of course how we’ll react to the result. Sometimes those prefight feelings can influence fans and even judges in how they perceive what they’re actually watching.

I’ll admit I also dropped the ball in the lead-up to this fight. I know I mentioned the left hand of Catterall in my article last week, and I said it could be effective, but I missed one of Taylor’s key vulnerable spots. I went back and I watched Taylor’s fight against Regis Prograis, and Prograis was having his best moments when he was fighting off the back foot and luring in Taylor — and that’s exactly how Catterall had all of his success. He lured Taylor in, let him make mistakes, beat him with the jab and then made Taylor pay with big, clean shots over the top.

Catterall deserves a lot of credit. This result has nothing to do with Taylor not showing up ready, or being drawn out because of his weight cut. This was Catterall at his best, executing an extremely effective game plan.