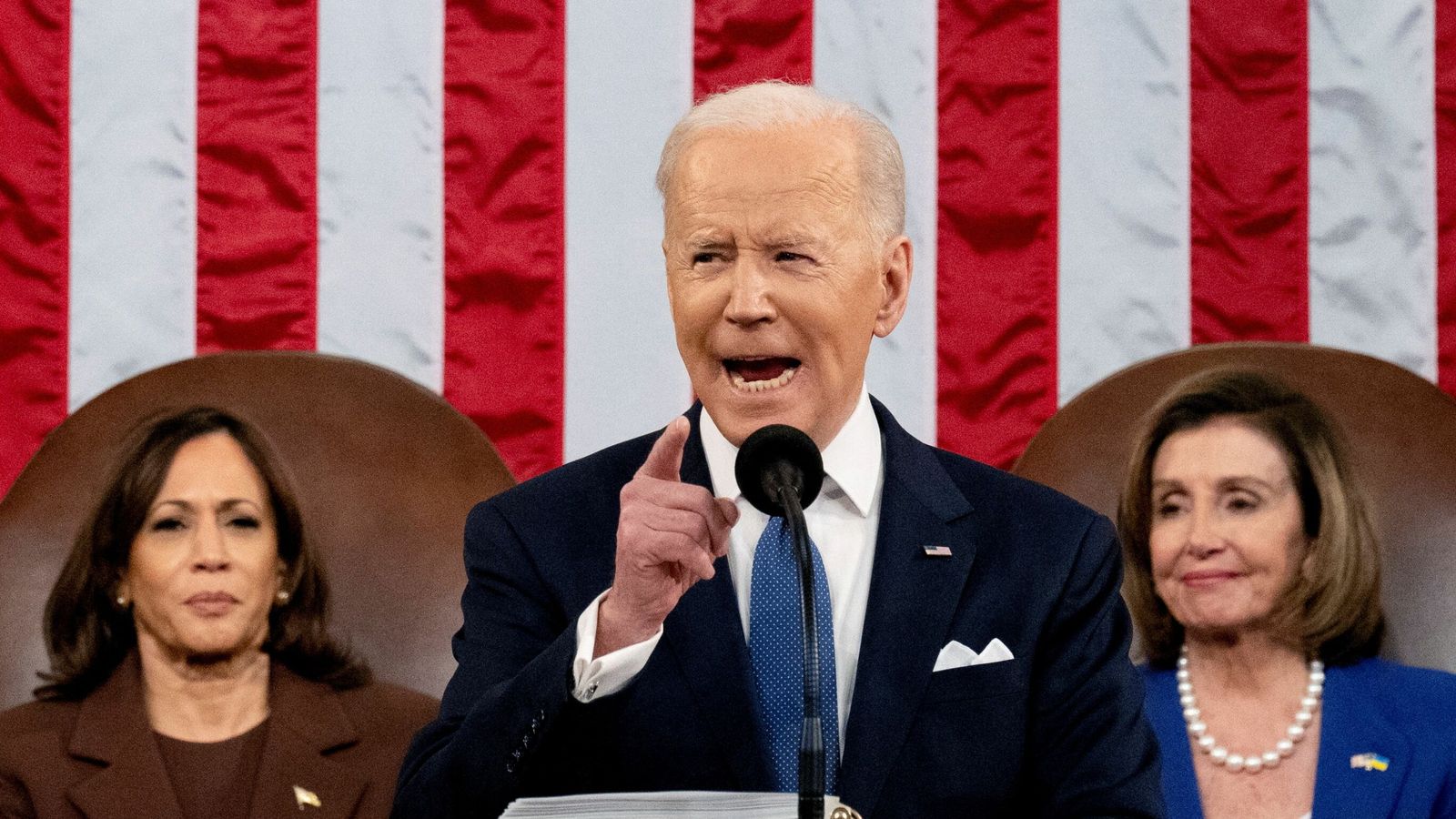 They had gathered in the house chamber on Capitol Hill for the key annual moment in America’s political diary.

With the yellow and the blue of the Ukrainian flag dotted through the chamber, President Joe Biden pitted democracy against autocracy; good against evil.

“Six days ago,” he said, “Russia’s Vladimir Putin sought to shake the foundations of the free world thinking he could make it bend to his menacing ways.

“But he badly miscalculated. He thought he could roll into Ukraine and the world would roll over. Instead he met a wall of strength he never imagined. He met the Ukrainian people.”

The camera, filming an event that always garners huge American audiences but which, this year, would draw a global following, cut away to reveal the guest of honour.

“The Ukrainian ambassador to the United States is here tonight,” the president announced.

Sitting next to the First Lady, Jill Biden, Oksana Markarova rose to her feet, emotional and with her hand on her heart.

“Let each of us here tonight in this chamber send an unmistakable signal to Ukraine and to the world,” the president said.

“Throughout our history we’ve learned this lesson when dictators do not pay a price for their aggression they cause more chaos. They keep moving.”

In other developments in the Ukraine invasion:
• Paratroopers storm military hospital in Kharkiv
• Russia tells people in Kyiv to leave their homes ahead of strikes
• Kremlin policy adviser reveals shock over Putin’s decision to invade
• Polish interior ministry says 450,000 have entered since invasion started
• Almost 6,000 Russian troops have been killed, say Ukraine president

Unity among nations was the key theme for Mr Biden. The subtext was to credit himself for leading the free world in isolating the Kremlin.

“In the battle between democracy and autocracy, democracies are rising to the moment, and the world is clearly choosing the side of peace and security.”

This was a message for those who surround Putin.

“Tonight I say to the Russian oligarchs and corrupt leaders who have bilked billions of dollars off this violent regime: no more.”

It prompted a standing ovation. “I mean it,” the president said.

Read more:
Putin must ‘pay a price’ for invading Ukraine, US president says in his State of the Union address
Russian oligarch calls for end to war but stops short of Putin criticism
‘Hit list’ of Russian oligarchs drawn up as Vladimir Putin’s allies warned over mansions and private jets

But at a time when American and Western resolve is facing its greatest test in decades, there were no standout soundbites, there was not a George Bush “axis of evil” moment. No, this was measured, calm, focused. Yet it couldn’t provide any hints of how this crisis will develop, how it might end.

And with Americans divided, struggling and his approval rating so low, the speech needed to be about much more than Russia.

Inflation, economy, coronavirus, infrastructure, health – they were words which cropped up a lot.

At the end a message of support for his top general.

“We have the best damn generals in the world,” he told the Chairman of the Joint Chiefs, General Mark Milley, a man whose counsel he values and may need in the coming weeks.