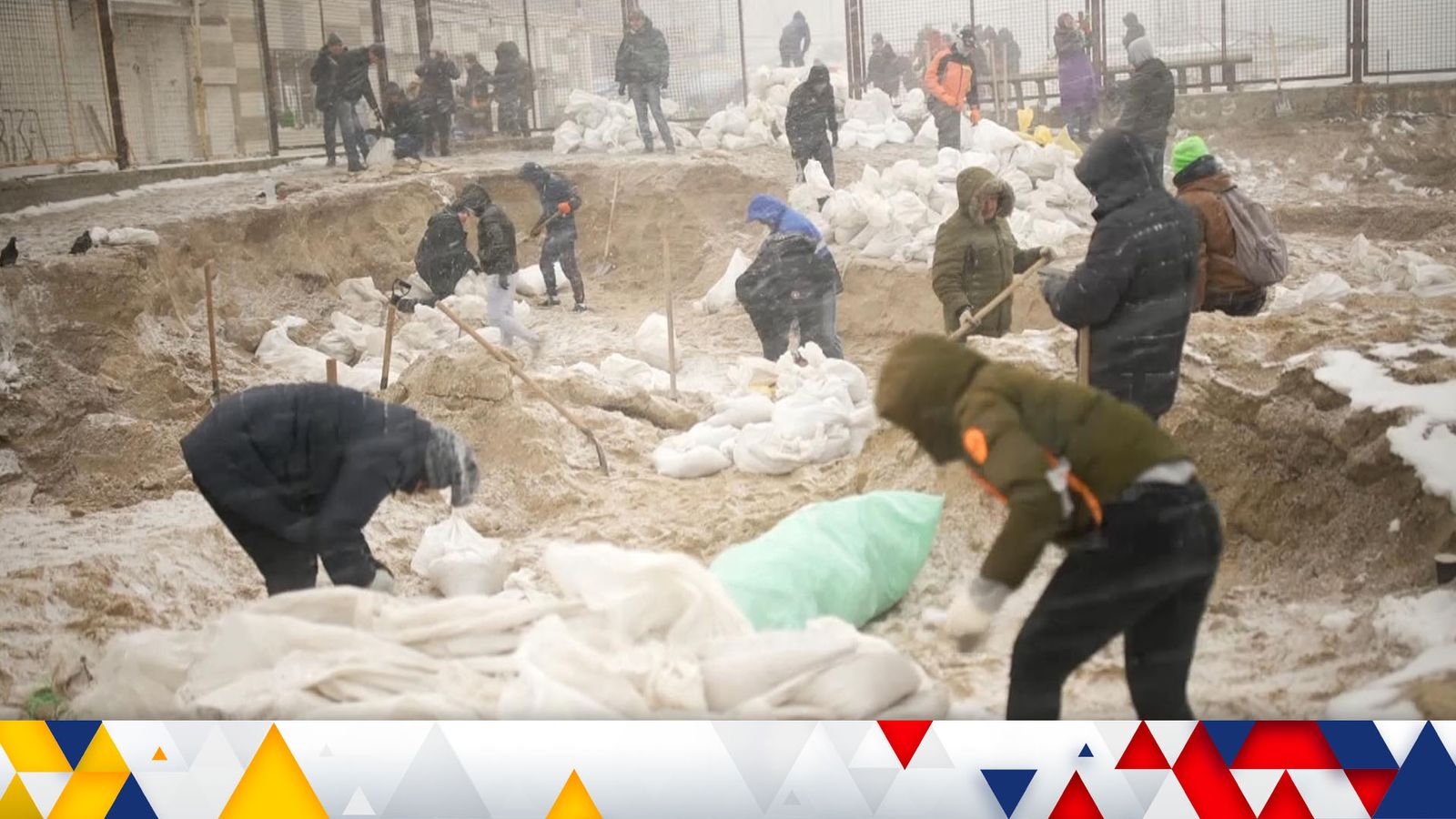 It is bitterly cold on the beach and the wind is howling. But they keep digging.

One man holds open a white bag while another fills it up with sand.

Then the choir begins to sing. It is a wartime serenade to give the volunteers some push to keep going, because on the beaches of Odesa – the Black Sea port thought to be Putin’s next target – they are preparing to defend themselves.

“This is very important because each sandbag is someone’s life,” says Albert Kabakov, a volunteer.

The choir is singing the Ukrainian national anthem in the wind and the snow. One man holds a patriotic hand to his chest.

The sandbagging continues: a staggering 350,000 bags have been filled in just two weeks. Everyone here just wants to survive.

Odesa is Ukraine’s third-largest city and is strategically important to Vladimir Putin. If he can take the city, then he could cut off Ukraine from the sea, which is why it is one of the main targets for the Russian offensive.

Putin’s forces are believed to be close by and advancing from the south. There have been reports that Russian warships are along the coast, but not confirmed.

Read more: At what point should NATO confront Putin?

Just a few weeks ago everything was just fine in Odesa – the famous cafes were open and the streets were busy.

Now those same streets have been fortified with a frightening array of barricades.

The sandbags made on the beaches are everywhere – blocking doorways, windows and roads. Huge steel crosses, called hedgehogs, have been placed in the roads, designed to stop tanks and military vehicles in their tracks.

There’s a carnival merry-go-round ride on the promenade overlooking the port and it has frozen solid, having not been used for the past three weeks.

And a cherished statue of Armand-Emmanuel du Plessis, Odesa’s first-ever governor, is shrouded in sandbags to protect it from any attacks from the sea.

Daniel Salem is a national guard soldier who has volunteered to fight. He thinks Odesa can hold back the Russian offensive.

“We have proved over the last few weeks that we can kick ass. And that’s what we are doing… kicking ass,” he said.

“Russia will never be forgiven for this. This will be remembered forever. It’s not war. This is murder.”

In peacetime, the Odesa food hall is usually buzzing with trendy food outlets and coffee shops. Today it has been transformed into a humanitarian aid station.

There are boxes of supplies, first aid kits and blankets. But they really need body armour and helmets, says volunteer Inga Kordynovska.

“We need money for pay it. Normal people do not have body armour and helmets. But we need them now.”

While we talk, an alarm goes off. It’s an air raid warning.

“Everybody, in the shelter, please,” shouts Inga.

Everyone makes their way down into the shelter and the air cools as we descend the steps.

There are 40 or 50 people down here now. A guy picks up a guitar and starts to play.

Everyone sits and listens until the all clear is given.

The bombing is moving closer to Odesa, and no one knows what will happen next.

Read more:
What chemical and biological weapons could Russia have?
Ukrainian refugees find a warm welcome in Poland after fleeing Putin’s forces
Which countries could broker negotiations between Russia and Ukraine?
Shelling hits new parts of Ukraine: What happened on day 16

Ex-Trump official reveals the moment he knew his job was at risk
Cost of living: Vulnerable people find every action has a ‘price tag’
CNN fact-checks McCarthy’s ‘highly misleading’ claims about Pelosi
Former top FBI official accused of trying to get Russian oligarch off sanctions list
What has Belarus got to do with the Russia-Ukraine conflict?