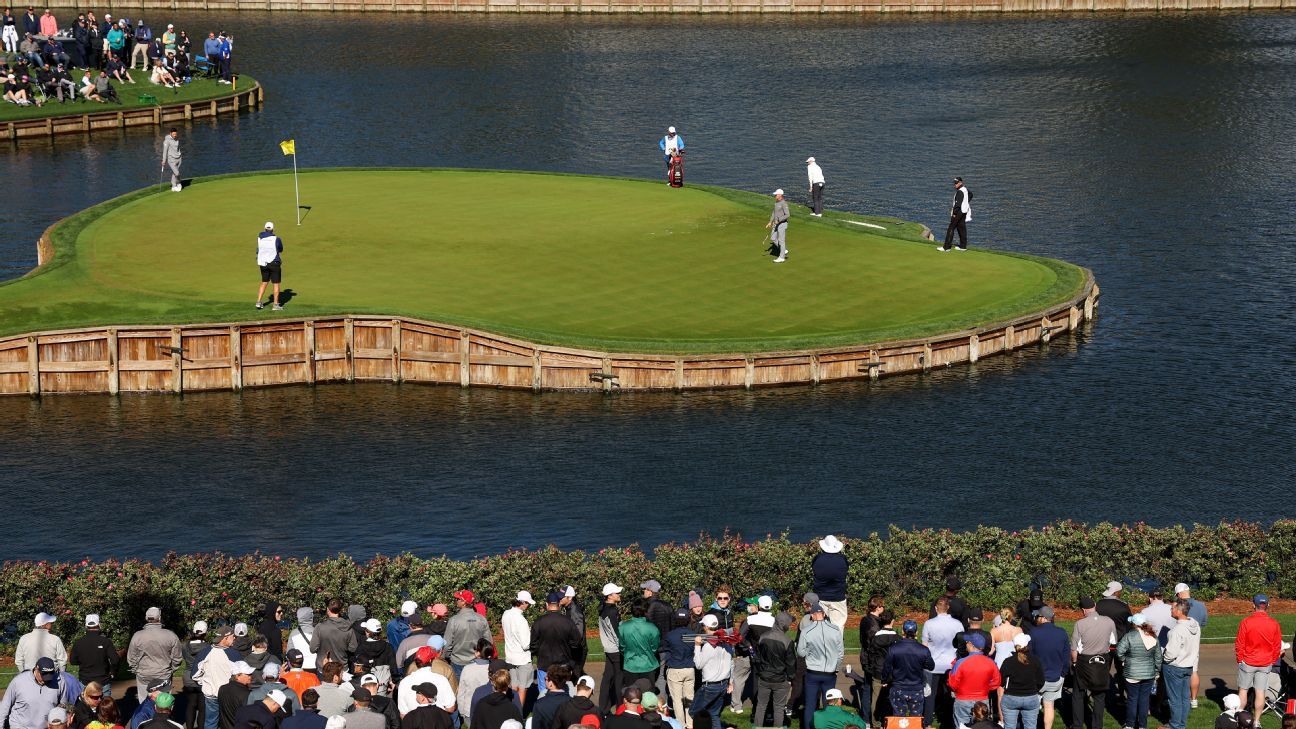 PONTE VEDRA BEACH, Fla. — Shortly after noon ET on Saturday, the first victims of the 17th hole of the Stadium Course at TPC Sawgrass arrived.

Scottie Scheffler, who had won in two of his past three starts on the PGA Tour, drew the short straw as the Players resumed and was the first player to hit a tee shot on the par-3 17th, which is either one of the most entertaining or infamous holes in golf.

Scheffler stepped off the tee box for the correct distance and gauged the 35 mph wind blowing in his face as he looked at the island green (really a peninsula) at No. 17. The Texan settled on a 7-iron and hit a low bullet. His shot was too long. The ball bounced once before dropping into the pond behind the green.

After watching what Scheffler did, Xander Schauffele, the seventh-ranked player in the world and the Olympic gold medalist, elected for an 8-iron. The wind gusted as his ball was in flight, just as it had on the 16th hole in the final round of the 2021 Masters, and his ball fell into the pond short of the green. He then went and quadrupled the 18th hole.

Brooks Koepka, a four-time major champ, also chose to hit an 8-iron. Like Schauffele’s, his shot was woefully short and ended up wet.

Just like that, three of the best players in the world saw their chances of winning the Players Championship (or even making the cut) evaporate on the 17th hole. Schauffele, who was 4 under after carding a birdie on the par-5 16th, ended up making a bogey. He made a quadruple-bogey 8 on the 18th hole.

Xander went from T9 to T90 in two holes to start his Saturday. pic.twitter.com/64gQaFsfNM

“There’s nothing you can do,” Koepka said. “We hit a gust. I don’t think it was going harder for anybody else out here than when me, Scottie and Xander played it. When we first teed off, that was my first shot of the day, and I thought it was blowing the hardest.”

Actually, the wind didn’t calm down for pretty much anyone on Saturday. After heavy rain and thunderstorms suspended play on both Thursday and Friday, players who were finishing up the first round and beginning their second were greeted by much cooler temperatures and wind gusts that hit as high as 43 mph.

The 17th hole at TPC Sawgrass was especially difficult on a windy Saturday.

On Thursday & Friday combined, there were 4 balls in the water and a cumulative score to par of +3.

Today, there were 29 balls in the water and a cumulative score to par of +66. pic.twitter.com/7HfjxvwB2A

The worst part for Koepka, Schauffele and Scheffler on Saturday was that they had to play the 17th hole twice, after finishing their last three holes of the first round and then starting the second round on No. 10. It was like having to play Gonzaga in the first and second rounds of the NCAA tournament.

The results were better for only Schauffele, who hit his tee shot to 53 feet and two-putted for par. Scheffler’s shot was even worse, as he hit a hosel rocket that plopped into the pond about halfway between the green and the old flower barge.

The man who hit this shot has won two of his last three golf tournaments pic.twitter.com/G2Raznkg68

No one has had worse luck on the hole than Koepka, who is 20 over on the 17th in seven appearances at the Players since 2015.

Jeff Young, a longtime spotter for NBC Sports, said he has worked the 17th hole for 20 years. Until this year, he remembered only two players — Fred Funk and Loren Roberts — hitting a 7-iron on the par-3 hole. On Saturday, nine of the first 15 players hit a 7-iron. Matt Kuchar hit a 6-iron.

Club selection caused a lot of anxiety between caddies and players. Right after Billy Horschel hit his shot with a 7-iron, with the ball still in the air, he told his caddie, Mark Fulcher: “It’s over the green, Fooch. I knew it! I knew it! I flight it better than everyone else.” Fulcher stood stoically and didn’t say anything. Horschel made a triple-bogey 6 and dropped four shots on the last two holes of the first round.

“You’re looking there, and it’s such a big target to hit the green,” McIlroy said. “Basically, it’s a big massive dartboard, and you’re like, ‘Just hit it anywhere on there.'”

That was easier said than done, even for the best iron players in the world. Any shot on the green — or even just on the island and dry — was considered a victory. Australia’s Marc Leishman did a fist pump and jiggle after knocking his shot to 7 feet. Zach Johnson, the next U.S. Ryder Cup captain, hit his shot to about 63 feet. He jokingly threw up his right fist in celebration.

Not everyone struggled. Justin Thomas played the 17th twice on Saturday and walked away with a pair of pars. Thomas said he received text messages on Friday night from Tiger Woods and Fred Couples, who were teasing him about how difficult the hole was going to be.

After Henrik Stenson knocked his ball safely onto the green with an 8-iron, longtime caddie Gareth Lord reached into his bag for a cigarette.

“On the green, I’m looking forward to this one,” Lord said.