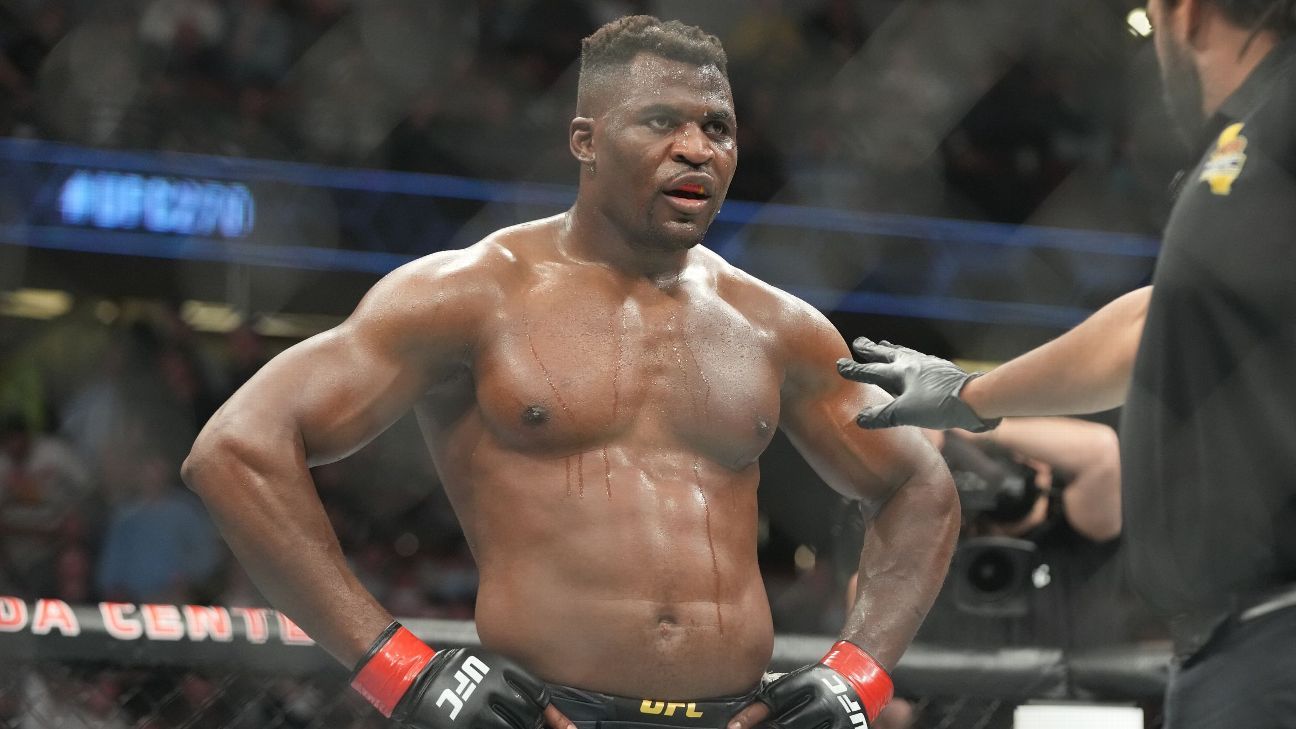 The UFC spotlight will fall on its heavyweights over the next two weeks, as four fighters from the division will headline the promotion’s next two events.

It’s an interesting time at heavyweight for a multitude of reasons. Current champion Francis Ngannou‘s future remains in the air, as he’s due for a new UFC contract but is scheduled for major knee surgery and is in the midst of a contract dispute. Former light heavyweight champion Jon Jones is expected to make his heavyweight debut at some point in 2022 as well — a move he’s teased for the better part of a decade.

As the division takes center stage, let’s take this opportunity to dig into the most pressing questions at heavyweight.

What is the latest on Ngannou and his relationship with the UFC?

Nothing has really changed since Ngannou fought out his contract in January. Now keep in mind, “fought out his contract” is a relative phrase as he’s still under a champion’s clause. But Ngannou’s interpretation of his contract is that he’ll be a free agent at the end of the year, and he’s already said he won’t fight under this current contract again — so, practically speaking, he’s done with the UFC unless he signs a new deal.

In the UFC’s first card in England since 2019, English heavyweight Tom Aspinall looks to extend a seven-fight win streak — all finishes — against the veteran Alexander Volkov.

Ngannou has been in Africa as of late, celebrating his most recent title defense over Ciryl Gane. He is scheduled for knee surgery this week back in the U.S., and won’t fight until 2023 regardless of contract status. He’s made it very clear he wants to box Tyson Fury next.

All of the issues surrounding Ngannou’s UFC contract negotiations are still present, but the one thing everyone has working for them now is time. There is no rush to get a deal done. Ngannou isn’t fighting again this year anyway, so there is less of a sense of urgency. That could make it easier to get something done.

Is Jon Jones, heavyweight champion, a possibility this year?

Of course it’s a possibility. The UFC hasn’t said much in terms of plans for the heavyweight division, because those plans start with Ngannou. But regardless of whether Ngannou stays with the UFC or ultimately parts ways, an interim title fight feels likely at this moment. Again, Ngannou isn’t fighting again in 2022 either way due to the knee surgery. It’s hard to envision a scenario in which the UFC lets all of 2022 pass without a heavyweight title fight on the books.

I believe Jones wants to fight this year after taking all of 2021 off. And I believe his first appearance at heavyweight will be with a title on the line, and rightly so — Jones is the most dominant light heavyweight champion in UFC history, and he has a strong case to make as the greatest MMA fighter of all time. As of right now, the most likely scenario is Jones vs. Stipe Miocic at some point in 2022 for an interim title. Or, if things go south with Ngannou’s contract negotiations, Jones-Miocic for the undisputed belt.

Which of the four heavyweights in the next two weeks will be a title contender soonest?

Aspinall. Behind the scenes — and publicly, too — there are a lot of people who are high on Aspinall.

He checks a lot of boxes at heavyweight. He’s quick. He’s young. He’s smart. He’s well-rounded. He’s a breath of fresh air in this division, frankly. The heavyweight division is always, always, always in need of new talent and Aspinall is right up there with Gane in terms of exciting new blood. The UFC obviously believes in him, relying on him to headline this card in London — the promotion’s first event in England since 2019.

Blaydes can be a problem for anyone with his wrestling, but in terms of ceiling — both in marketability and competitiveness — Aspinall is that guy right now at heavyweight.

No. As just mentioned, there is a strong possibility Miocic’s next fight will be for a UFC championship against Jones. Now, if he loses that fight, he might be looking at gatekeeper status.

Gane is still a baby in MMA, especially when it comes to the typical age of a top heavyweight. We’re less than three months removed from him being an interim champion, and he nearly beat Ngannou to become the undisputed champion. Gane could easily still be the future of the heavyweight division. I’d say his chances of becoming a UFC champ before his career is over are quite high.

As far as Lewis, he’s pretty far away from another title shot at this point, but I wouldn’t say that dream is over. As popular as he is, and as consistent as he is … he could still get a UFC title shot in the future. Time is not on his side, but he just knocked out Chris Daukaus four months ago, and he was beating Tai Tuivasa in February before he got clipped in an exchange. He’s not in gatekeeper status yet.

Who is the UFC’s heavyweight champion this time next year?

Man. I’ve gone back and forth on the likelihood of Ngannou re-signing with the UFC. I thought it would definitely happen, then I was pretty sure it wouldn’t happen, now I’m back to thinking it will happen — but I’m not strongly confident either way.

As of today, I’ll say Ngannou is the UFC’s heavyweight champion this time next year, with a brand new UFC contract. But we will see how negotiations play out.

Discovery of unserved warrant renews family’s call for justice for Emmett Till
Podcaster Dame Deborah James dies after battle with bowel cancer
Ex-aide was backstage with Trump at his Jan. 6 rally. Here’s what she heard him say
‘Devastating’: Woodward calls Jan. 6 testimony Trump’s ‘political obituary’
War in Ukraine: What weapons are being given to Ukraine by the UK?