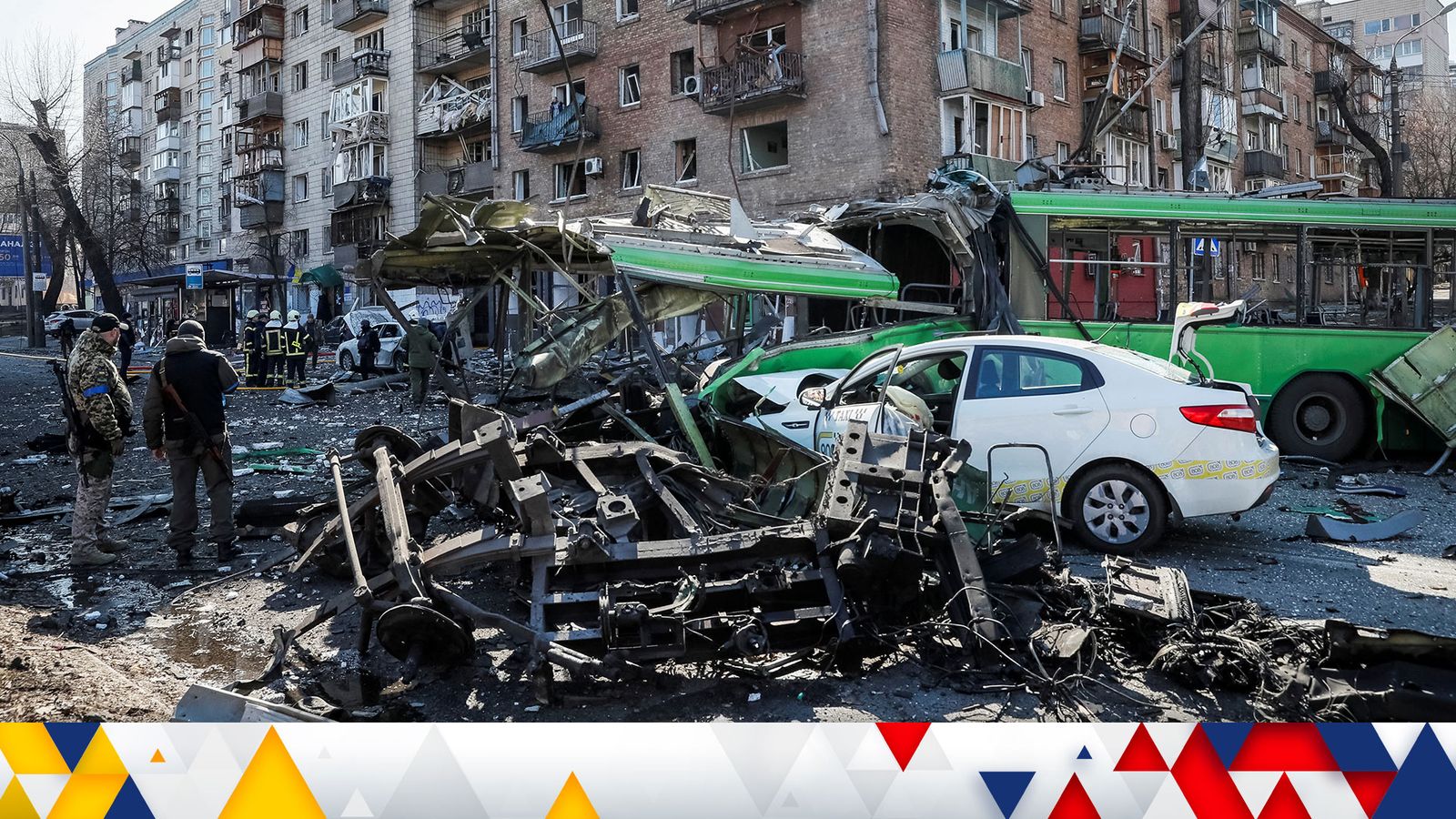 Russia’s military forces have kept up their punishing campaign to capture Ukraine’s capital with fighting and artillery fire in Kyiv’s suburbs.

Ukrainian officials said Russian forces shelled several suburbs of the capital, on the 19th day of the invasion.

A new round of virtual talks due to take place between Russian and Ukrainian officials has raised hopes that progress will be made in evacuating civilians from besieged Ukrainian cities and getting emergency supplies to areas without enough food, water and medicine.

Sky’s special correspondent Alex Crawford has been reporting from a nine-storey apartment building in a northern district of the city which was hit by artillery early on Monday morning, destroying apartments on several floors and starting a fire. 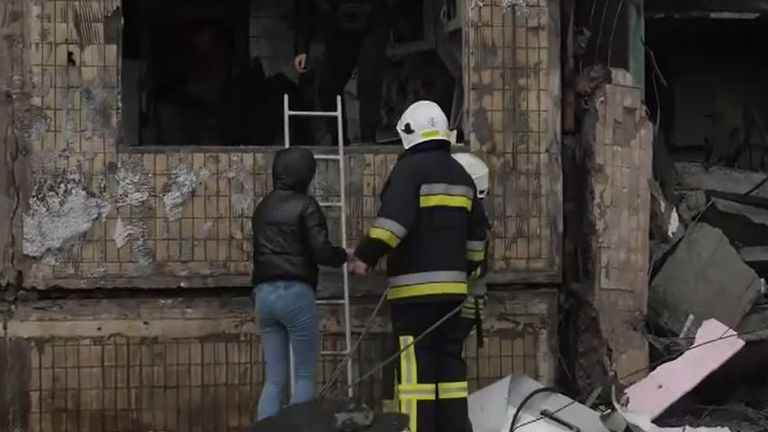 Special Correspondent Alex Crawford reports from Kyiv, where a residential block was hit by artillery overnight.

Firefighters could be seen helping people retrieve their belongings from the burnt out apartments with ladders and other equipment.

At least two people are believed to have been killed in the attack.

Later, reporting from the scene of an intercepted missile attack close to the city centre where a 59-year-old man was killed, Crawford spoke to local MP Alex Goncharenko who called for urgent air support for Ukraine.

He added that he believed the Russians would not take Kyiv, but may destroy it.

“If they will penetrate the city, we will make hell here for them,” Mr Goncharenko said. When Crawford suggested they could make hell for the Ukrainians, he answered: “It is already hell for us.”

Authorities have said they are stockpiling food for two weeks for the estimated two million people who are still in the city.

The Antonov factory is Ukraine’s largest aircraft manufacturing plant and is best known for producing many of the world’s biggest cargo planes.

Shells also fell on the Kyiv suburbs of Irpin, Bucha and Hostomel, which have seen some of the worst fighting in Russia’s stalled attempt to take the capital, regional administration chief Oleksiy Kuleba said on Ukrainian television.

Ukraine’s Deputy Prime Minister Iryna Vereschuk said attempts will be made today to evacuate trapped civilians through 10 “humanitarian corridors”, including from towns near the capital Kyiv and in the eastern region of Luhansk.

“We will, once again, try to unblock the movement of the humanitarian convoy carrying food and medicine to {the port city of Mariupol) from Berdiansk (in southeastern Ukraine),” she said in a video address.

It comes after an air strike on a military base 12 miles from the Polish border brought the war close to NATO’s doorstep.

Thirty-five people were killed and 134 injured in Sunday’s strike in Yavoriv, which has long been used by Western experts to train Ukrainian soldiers.

Ukraine’s President Volodymyr Zelenskyy has said “it’s only a matter of time” before Russia missiles hit the homes of people in NATO countries if a no-fly zone is not set up. Zelenskyy: ‘Only a matter of time before Russian missiles fall on your territory’

“Nothing was happening there that could threaten the territory of the Russian Federation,” said President Zelenskyy about the base attack.

“And only 20 kilometres away are NATO borders. Last year, I made a clear warning to NATO leaders that if there were no tough preventive sanctions against Russia, it would start a war. We were right.”

Poland’s deputy foreign minister told Sky News the attack was “highly proactive” and that Russia knows very well where the border is.

Health Secretary Sajid Javid told Sky News’ Kay Burley any infringement of Russia into a NATO country “will be a war with NATO”.

“If there was an attack on any NATO country, even just a single toe cap of a Russian soldier steps into NATO territory, it will be a war with NATO and NATO would respond.

“There would be a significant response from NATO if there was any kind of attack from Russia, we’ve been very, very clear on that.”

Kremlin says US and EU provoking it to attack cities

On Monday the Kremlin said at the very start of the invasion Russian President Vladimir Putin asked the defence ministry not to storm major population centres.

Ukraine’s general prosecutor office said 90 children had been killed and more than 100 injured since the invasion began.

Ukrainian officials have estimated that 2,500 people have been killed in the port city of Mariupol since the start of the war.

Nadhim Zahawi : ‘It’s obvious Zahawi can’t stay on’ – Labour leader
CNN fact-checks McCarthy’s ‘highly misleading’ claims about Pelosi
Calls for energy firms not to force people on to prepayment meters
Retired general predicts when Ukraine will see new tanks
What has Belarus got to do with the Russia-Ukraine conflict?